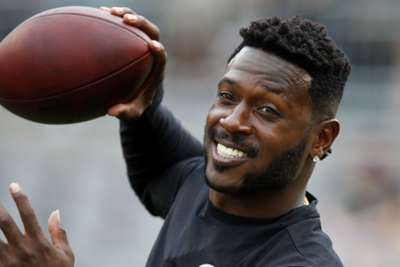 Some of the narratives everyone has been following this NFL preseason took a new twist on Tuesday.

Antonio Brown, who just days ago reportedly threatened to retire because he could not use his old helmet, returned to Oakland Raiders training camp.

Jadeveon Clowney, a camp holdout who has been widely expected to report to the Houston Texans later this month, now appears likely to be traded, according to a report.

And there might be more to Andrew Luck's calf injury than has been reported.

Those stories and more in Tuesday's edition of NFL News and Notes.

Brown opened a new chapter in his strange preseason on Tuesday, returning to the Raiders' training camp in Napa, California. Accompanied by his agent, Drew Rosenhaus, and followed by the production crew for HBO's "Hard Knocks," the star wide receiver said he was excited to be back.

"I'm dealing with a lot of adversity … but I'm excited to be back with my team-mates," Brown said.

Brown said he does not know when he will be able to return to practice, but head coach Jon Gruden said he expects he will be ready for the regular season.

"We'll work him back in, obviously it's great to have him back," Gruden said.

Rosenhaus said Brown returned to camp because he had completed treatment on his feet, which reportedly were frostbitten during cryotherapy. Rosenhaus did not offer details, citing possible legal action. However, Rosenhaus said Brown's feet were the real reason he missed camp. Brown had reportedly been absent from camp over a dispute involving what helmet he could wear. The All-Pro wide receiver wanted to use his old helmet, which is not on the NFL's approved list. He had even reportedly threatened retirement if he could not use the helmet.

The NFL has reached a compromise with Brown allowing him to use an old model if it is less than 10 years old. Rosenhaus said Brown has located several older models he plans to submit for approval. No word on whether Brown found any of those helmets through his Tuesday morning tweet seeking a helmet in exchange for an autographed helmet.

Clowney, who wants a contract extension the Texans do not want to offer right now, has been a training camp holdout, but had widely been expected to report to camp later this month.

But a report Tuesday suggests the Texans are actively shopping Clowney. The Houston Chronicle's John McClain reported he would "be surprised" if Houston do not trade Clowney before the start of the season.

The Texans put the franchise tag on Clowney in the offseason, but he has not signed it yet.

McClain suggested the Texans might be looking to move Clowney for a left tackle. Quarterback Deshaun Watson was sacked 62 times last season, more than any other NFL quarterback.

McClain did not believe, however, the Texans would pursue Washington Redskins tackle Trent Williams, who has also reportedly requested a trade.

Luck's 'small little bone' issue might be problem for Colts

Indianapolis Colts quarterback Luck's calf injury may be more complicated than has been reported.

Luck has missed all but three training camp practices because the Colts are being cautious with the injury he suffered this spring. But Colts owner Jim Irsay told SiriusXM NFL Radio that Luck is dealing with a "small little bone" injury in his lower left leg.

"I feel very confident he's going to find a way through this thing. I think after the [Kevin] Durant thing, everyone is erring on the side of caution, but quite frankly, this is not even in the Achilles tendon," Irsay said. "It's a bone. I'm not good at these things, but it's a small little bone."

This could be just a minor thing, but the fact Irsay has revealed this detail on Luck's injury suggests it might be something more. And notice how the timeline on Luck's full return to action has changed. Reich said in June that Luck would be able to play if there were a regular season game coming up. Yet he has been a spectator most of training camp, and now has something going on with a "small little bone." Recall how, throughout the spring and summer of 2017 the Colts kept moving back the goalposts on when Luck would return from offseason shoulder surgery. He ended up missing the entire season.

No one is suggesting this will end up being a similar situation, but the parallels are interesting.

Luck made his fourth Pro Bowl last season after throwing for 4,593 yards with 39 touchdowns and 15 interceptions. The Colts desperately need him healthy to get ready for the season.

"I hope Eli has a great year and Daniel never sees the field," Mara told reporters. "That would be an ideal world where you would like to see that. Again, at the end of the day it's going to be the decision by the head coach [Pat Shurmur] as to when or if Daniel ends up playing this year."

When pressed on whether he would be happy if Jones did not play "one snap" this year, Mara didn't back down.

To just glance at Mara's quotes, which were featured in numerous headlines, is to imagine the owner is a kindred spirit to those Giants fans who ripped the team for picking Jones sixth overall in the NFL Draft. Despite the awkward soundbites, however, Mara was merely expressing the opinion that if Manning plays well, that probably means the Giants are excelling. Almost anything would be better than last season's 5-11 mark.

The 38-year-old Manning is set to open the season as the starter, but Jones has turned heads thus far. He completed all five of his passes for 67 yards and a touchdown in his NFL preseason debut against the New York Jets last week.

No matter who is under center, the Giants passing game will face a tough time early this season. The NFL has denied Golden Tate's appeal of a four-game suspension for violating the league's policy on performance-enhancing substances, Corey Coleman suffered a season-ending torn anterior cruciate ligament and Sterling Shepard is playing with a fractured thumb.

So that is it, right? Rosen, acquired from the Arizona Cardinals in the offseason, has seized control of the job, right?

Not so fast. Fitzpatrick is still scheduled to start the second preseason game against the Tampa Bay Buccaneers, just as he did the opener, with Rosen likely coming on to play most of the game. But Tuesday's development is a big step for Rosen, given head coach Brian Flores has studiously avoided giving him first-team reps in camp.

Flores was not exactly effusive in his praise for the second-year QB on Tuesday, saying he did an "OK job."

"I thought it was a lot of fun," Rosen told reporters afterward. "Got a lot to study tonight, overall it was a positive."

Bottom line: This competition is not over yet.

O.J. Simpson tweeted a video that touched on everything from Dak Prescott's and Ezekiel Elliott's contract negotiations with the Dallas Cowboys to Simpson's fantasy football league (he says Prescott would not even be drafted in the top 10) to how much the game has changed ("God forbid you hit a wide receiver too hard downfield").

I feel bad for @EzekielElliott but not sorry! #DallasCowboys #NFL pic.twitter.com/QXScVel9Sk

Just when you thought the Brown helmet saga could not get any stranger … it did. Tuesday morning, Brown tweeted out a plea to help him locate a helmet: "I'm looking for a Schutt Air Advantage Adult Large Helmet that was manufactured in 2010 or after. In exchange I will trade a signed practice worn @Raiders helmet."

"I'm looking for a Schutt Air Advantage Adult Large Helmet that was manufactured in 2010 or after. In exchange I will trade a signed practice worn @Raiders helmet."