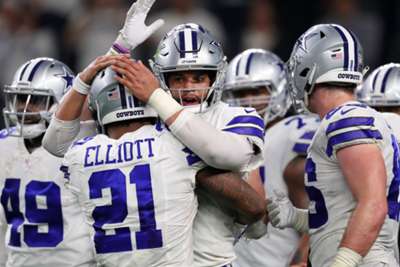 Jerry Jones has a problem. He has too many good players and not enough money to go around.

Dak Prescott, Amari Cooper and Ezekiel Elliott all want new contracts and it may not be possible to keep all three, or at the least, it will be tough to pay everyone what they are worth.

But one former Cowboy believes they can get all three deals done.

"It's possible," Tony Romo told Omnisport this week in association with Corona.

"There's ways to… you can always keep anybody you want… there's ways with the salary cap to push stuff down the road, you don't really have to worry about it for seven or eight years.

"You can keep everybody on this team, it just won't hit until down the road, you just have to make sure that you're putting the money in certain people who are going to be here a long time."

The challenge for the Cowboys comes in several different forms. For one, the price of a quarterback is high nowadays and Prescott reportedly has asked for a deal in the $30million-plus per year range. And with his numbers being what they are, it is hard to argue with him asking for just that.

Eagles quarterback Carson Wentz got a deal averaging around $32m and Prescott's numbers are better. So, he would be justified in asking for that type of money.

But if he gets that money, it will be difficult to give Elliott – a two-time rushing champion – what he wants, much less Cooper what he has earned. When Cooper came over to Dallas in a trade with the Oakland Raiders last year the Cowboys' offense instantly got better, as did Prescott.

Before Cooper arrived in Dallas, Prescott threw for 200 or more yards three times in seven games. After Cooper was in the fold he did it eight times in his past nine and eclipsed the 300-yard mark twice after not doing that at all in his first seven games.

It is a tough task to get everyone what they deserve and keep a good team in tact down the road, but Romo believes the Cowboys' ownership can get it done.

"I think that Jerry and Stephen Jones have done this a long time," Romo said. "I think all their deals are going to get done.

"I don't think it's much deeper than they love all of their players, I think they want them to get done.