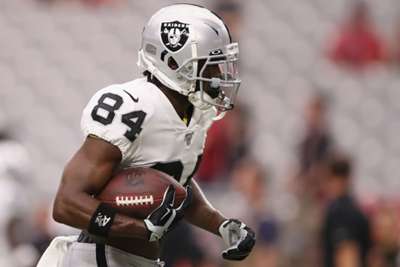 The drama appears to be cooling off in Oakland, but things could really start heating up in Dallas.

With one player nearing the end of his equipment dilemma, another is only digging himself into a deeper hole as he likely prepares to extend his contract holdout into the regular season.

Antonio Brown 'helmetgate' could be nearing an end

Oakland Raiders coach Jon Gruden told reporters the star receiver participated in Tuesday's practice at the team's facility with a certified helmet, which is a step in a positive direction considering Brown's other headgear has either been removed from the NFL's approved list or failed testing in recent weeks.

"He's all in and ready to go," Gruden said. "That's my understanding. Really happy to have him out here. He's a great player."

If there are no further setbacks with his latest helmet, Brown could be ready to make his Oakland debut next month when the Raiders open the regular season against the Denver Broncos.

Turns out, the first lucrative deal that Dallas are willing to give out ahead of the 2019 season will not be to Ezekiel Elliott, Dak Prescott or Amari Cooper. Instead, the Cowboys agreed to an extension with Smith, who was in the final season of the four-year, $6.49million contract he signed when he was drafted by Dallas in the second round in 2016. It is worth noting the linebacker missed all of 2017 with a leg injury but Smith has since bounced back and started in 22 of his 32 career games, including all 16 in 2018.

Still, the news cannot be sitting well with Elliott amid his holdout.

The Indianapolis Colts quarterback has been limited to just three practices since April and he will not be getting any extra work this week, as coach Frank Reich said Luck will continue to be held out. Reich noted the issue remains a matter of "full speed movement versus pain threshold", though it does not bode well for Luck considering the team want to decide by the third preseason game whether he will be able to start. Given Luck's latest setback, it is looking like backup Jacoby Brissett will assume the opening-game starting role.

The New England Patriots wide receiver took a big step in his rehab from an Achilles tear in December as he took the practice field on Tuesday in a jersey and helmet. Thomas' season was cut short after he was traded to the Houston Texans from the Broncos last year, but he appears ready to turn around his production decline after reportedly being moved off the physically unable to perform list and onto the active roster.

Julio Jones could finally be on the verge of getting paid

The wide receiver's agent, Jimmy Sexton, is in Atlanta to reportedly try to nail down a deal for his client this week. Jones, who is set to earn $9.6m in 2019, has two years left on the five-year contract worth $71m he signed in 2015.

"Yeah my agent is in town," Jones said, per the Falcons' official website. "There's nothing for me to report, just front office business with my agent."

Jones had sat out amid his contract holdout in 2018 but took a different approach this year, and it seems to be paying off.

Carli Lloyd stopped by Philadelphia Eagles practice and showed Jake Elliott how it was done.

Now that we have your attention, here’s a 55-yarder! pic.twitter.com/7k2WeQNUso

Troy Polamalu is back, and he took down Kansas City Chiefs quarterback Patrick Mahomes with two fingers.