Cowboys´ Elliott ´ready for a normal workload´ in Week 2 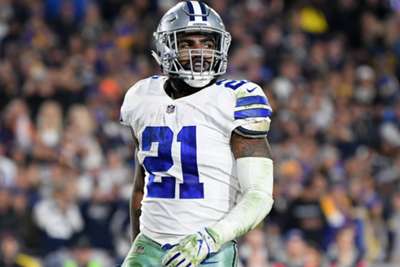 The 24-year-old, who held out for the entire preseason, rushed for 53 yards on 13 carries in the Cowboys' Week 1 win over the New York Giants.

He said he wants to play a bigger role in the team's matchup with the Washington Redskins on Sunday.

"But if they ask me, I'll be able to go out there and do it.

"There's a difference in going out there running around and not being hit and then being hit and having to come back and do the same thing. So that takes a little bit more out of you but, I mean, I think I'm good."

Elliott signed a six-year, $90million extension shortly before the start of the regular season.

He split time in Dallas' backfield with Tony Pollard in the team's 35-17 victory over New York in Week 1.

"Obviously, I was a little rusty," Elliott said after that game.

"I didn't play the best game. I have a lot I can improve on. But that's going to take time, and it's about getting more reps and being out there longer."

Dallas quarterback Dak Prescott completed 25 of his 32 passes for 405 yards with four touchdowns in Week 1.