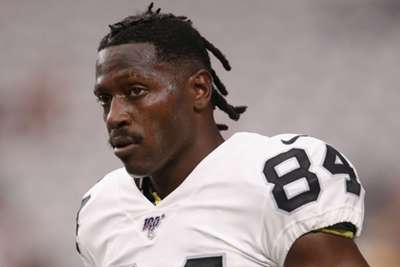 Another week, another news cycle dominated by Antonio Brown.

But while all of that was going on, several big injuries hit both major sports in full swing.

And also, disappointment at FIBA World Cup for defending champions the United States.

All of that and more on this week in US Sports.

The Antonio Brown drama just will not stop. As of last Thursday, the wide receiver was fighting with his team the Oakland Raiders, his general manager and social media. Now, one week later, he has been released, signed with the New England Patriots and has had a civil suit filed against him alleging he raped and sexually assaulted his former trainer.

It has been a long week for Brown, and he is in a similar spot to where he was a week ago — waiting to see what will happen come on Sunday.

Will the NFL or Patriots suspend Brown? Well, the Patriots can suspend him, the NFL would likely only put him on the commissioner's exempt list, but either way, he is once again in wait and see mode as are all NFL fans.

The Patriots play the lowly Miami Dolphins on Sunday though, so his return at least is not pressing for New England.

With the first week of the NFL season there is football, but there is also disappointment and most of said disappointment comes by way of injury. There were plenty of huge injuries in the first game for many teams.

In Jacksonville, Jaguars quarterback Nick Foles suffered a shoulder injury and is out for a good amount of time. In Washington, Redskins running back Derrius Guice suffered a meniscus injury and will likely be out for more than a month. In Kansas City, Chiefs wide receiver Tyreek Hill also hurt his shoulder and could miss four or more games, and in Los Angeles, Chargers tight end Hunter Henry once again will be down for a while as he suffered a bad knee injury.

Now teams will have to adjust to these injuries and figure out what to do moving forward. But we encourage you to check out Foles' replacement in Jacksonville. Rookie Gardner Minshew was good in relief of Foles and he was named the best senior quarterback in college last season. We think he could fill in more than admirably.

The United States crashed out of the FIBA World Cup after they lost to France in the quarter-finals and were eliminated completely in their next game when they fell to Serbia.

This was a team that were always going to have a tough time winning the tournament despite being the favourites to win it as All-Stars like James Harden, Damian Lillard and Anthony Davis all pulled out of the event.

In the end, this USA team will be known for who did not play than for their end result.

"I can only say, you can't help but notice and remember who you thought you were going to war with and who didn't show up," USA basketball managing director Jerry Colangelo told reporters. "I'm a firm believer that you deal with the cards you're dealt. All we could have done, and we did it, is get the commitments from a lot of players. So with that kind of a hand you feel reasonably confident that you're going to be able to put a very good representative team on the court.

"No one would have anticipated the pullouts that we had."

The ball has been flying out of MLB ballparks at an alarming rate this season, and as of Wednesday, it has flown out more than ever before in a single year.

With Baltimore Orioles utilityman Jonathan Villar's three-run homer in a 7-3 win over the Los Angeles Dodgers, MLB teams had combined to hit 6,106 home runs this season which broke the 2017 mark of 6,105 home runs.

5. Likely National League MVP out for the year

The National League's best player and reigning MVP Christian Yelich is done for the year.

Yelich broke his knee cap when he fouled a ball off his leg during the Milwaukee Brewers' clash with the Miami Marlins on Tuesday. Fortunately, he will not have to have surgery, but with the Brewers tied with the Chicago Cubs for the second wild-card spot in the NL, this is a devastating blow for Milwaukee.

He was the undisputed leader in the NL MVP race and is now out for the season.