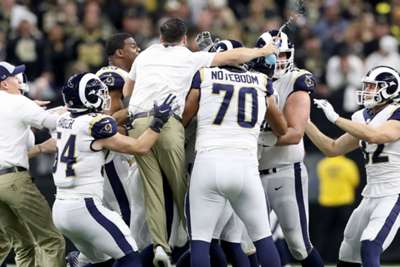 The New Orleans Saints will be on a revenge mission when they do battle with the Los Angeles Rams on Sunday.

Los Angeles claimed a dramatic 26-23 overtime win over New Orleans in the NFC Championship game in January and they are set for an early-season battle nine months later.

Both sides got their seasons under way with victories and the Rams will have home advantage as they go in search of back-to-back successes.

The Green Bay Packers lock horns with the Minnesota Vikings, while the Seattle Seahawks travel to face the Pittsburgh Steelers.

We look at some of the key Opta facts for seven games on the second Sunday of the campaign.

The Cowboys have won five of the six games they have played against Washington since the start of the 2016 season, but the Redskins came out on top 20-17 at FedEx Field last season.

Washington went down 24-0 in their last home game of last season versus the Philadelphia Eagles, their fourth consecutive defeat in their own backyard.

The Colts have swept the Titans in all but one of the last seven seasons, with the exception being when Tennessee won both games in 2017.

Tennessee have won 75 per cent of their home games since the start of the 2017 season (12-4). Only five teams have a better home winning percentage in that time (New England, New Orleans, Kansas City, Philadelphia, Minnesota).

The Dolphins have lost two straight home games, failing to score more than 10 points in either game. Patriots quarterback Tom Brady has thrown three or more touchdowns in nine regular season games against Miami, who shipped 59 points in their season-opening loss to the Baltimore Ravens.

Since the start of last season, Bills quarterback Josh Allen has nine rushing touchdowns, three more than any other quarterback.

The Steelers have won seven of the nine games played in Pittsburgh against the Seahawks, while Seattle have been shut out in their last two visits to Heinz Field.

Steelers quarterback Ben Roethlisberger failed to throw a touchdown pass in Week 1, snapping a streak of 26 consecutive games with a touchdown pass - the second-longest run in franchise history.

Minnesota have not lost to Green Bay in their last four matches, winning three. The Packers finished last season with a 31-0 home defeat at the hands of the Detroit Lions, but a vastly more competitive game will be expected against the Vikings with Green Bay quarterback Aaron Rodgers back to full fitness.

Vikings safety Anthony Harris had two interceptions against the Atlanta Falcons last week. He had three interceptions in his previous 51 NFL games.

New Orleans wide receiver Michael Thomas had 10 receptions for 123 yards in Week 1. It was his 10th career game with 10 or more catches, the second most in the league since 2016 – Antonio Brown (11).