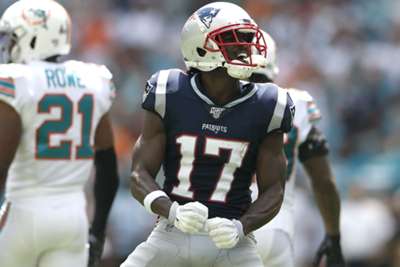 It did not take long for Antonio Brown to get on the board for New England.

The Patriots receiver scored his first touchdown with his new team in the second quarter of Sunday's game against the Miami Dolphins.

Brown, making his debut in his hometown of Miami, caught a 20-yard touchdown pass from Tom Brady late in the first half. The reception made Brown the 72nd player to catch a regular-season touchdown pass from Brady, extending an NFL record for the veteran quarterback.

The 31-year-old, who was active Sunday despite being accused of sexual assault and rape in a civil lawsuit last week, had four catches, one rush attempt and a touchdown in the first half alone.

Brown was traded from the Pittsburgh Steelers to the Oakland Raiders in the offseason. He never played a game for the Raiders, however, after Oakland granted his request for a release following a series of offseason episodes.