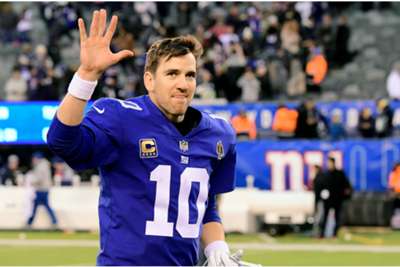 It finally happened: Eli Manning has been benched by the New York Giants.

It has been on the horizon for several years. It almost happened in 2017 when then-coach Ben McAdoo dropped Manning in favour of Geno Smith, but McAdoo was fired soon after and the veteran reprised his role.

Now it is rookie Daniel Jones' turn, and the writing had been on the wall.

Jones was drafted to be the Giants' quarterback of the future, he was great in the preseason and Manning was sub-standard as New York started 0-2.

But no matter what you think of Manning, he goes down as one of only 12 quarterbacks to win multiple Super Bowls. That is where the conversation about his career must begin.

Manning did not just win two Super Bowls, he was a two-time Super Bowl MVP, and in those games he made iconic throws and posted good numbers. He went 49-for-74 passing for 551 yards with three touchdowns and one interception and beat Tom Brady twice.

One of the GREATEST plays in #NFL100 history: Mario Manningham's catch in SBXLVI comes in at No. 31.#GoBlue | #ProBlue @ManninghamNYG pic.twitter.com/RXM3zXHe39

But while those are incredible accomplishments to hang his hat on, his run to those Super Bowls cannot be forgotten either. The Giants had to win four games in both postseasons and Manning threw 15 touchdown passes to just two interceptions while going 8-0.

It is unlikely the Giants would have won either of those championships without him. That truly defines his career.

However, a less impressive factor that cannot be overlooked is his winning percentage as a starter in the regular-season. Manning has made 232 starts in his career and has a 116-116 record.

Championships are the true measure of a quarterback, but a team does not expect a .500 record when it pays $252million to a player over their career.

Manning has made only four Pro Bowls in his 15-year career and has never won a regular-season MVP award, but his stats are impressive.

Manning has seven 4,000-yard passing seasons, three years with 30 touchdown passes and is seventh all-time in passing yards and eighth in passing touchdowns. Add that to two Super Bowls and that is certainly a Hall of Fame resume.

However, a look at the entire picture muddies his legacy. Manning also had three 20-interception seasons and is currently 14th all-time with 241 career picks.

Manning is undoubtedly a talented and successful quarterback but with a career full of average performances and a 38-59 record over his past seven seasons, it is unsurprising the Giants are looking to move on.