Manning on being benched by Giants: I´m not dying and the season is not over 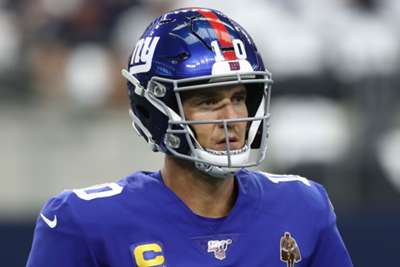 Eli Manning is ready to accept his back-up role with the New York Giants and will offer support to Daniel Jones as the rookie quarterback prepares to make his first NFL debut.

After two straight losses to start the new season, the Giants announced on Tuesday that Jones - who they selected with the sixth pick in the draft - will be the starter for the Week 3 clash with the Tampa Bay Buccaneers on Sunday.

Manning had thrown for 556 yards with two touchdowns and two interceptions in defeats to the Dallas Cowboys and the Buffalo Bills.

The two-time Super Bowl champion acknowledged some of the emotions that came with coach Pat Shurmur's decision, but insisted he is going to do everything possible to help the Giants win.

"I talked to (co-owner) John Mara yesterday (on Tuesday). Everything's been good. It's as positive as it can be," Manning told reporters in his first public comments since the team announced the change.

He added: "We've got a lot of football [left]. I'm just going to do my part, do my job, get Daniel ready to play.

"I'm not dying and the season is not over. There's a lot to be positive about, a lot to be grateful for. I'm just going to accept my new role and make the best of it."

Daniel Jones: To Giants fans, I will compete as hard as I possibly can.

Manning, 38, replaced Kurt Warner in November 2004 and has made a franchise record 232 starts, in addition to earning two Super Bowl MVP awards.

With uncertainty after the Giants drafted a young quarterback, Manning said he still would have come back for another season even if had he known he would be replaced this soon.

"I didn't know how everything was going to shake out this year," Manning said.

"You've got a young quarterback. Yeah, it's a possibility [I'd be replaced] if things don't go well. We didn't start fast, and that's the situation we're in now.

"We gave it a shot, worked hard, competed. I did everything I thought I could and it just didn't work out."