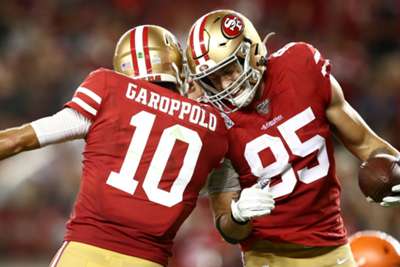 The San Francisco 49ers improved to 4-0 for the first time since 1990 after beating the Cleveland Browns 31-3 in NFL action on Monday.

Both teams were playing for a rare feat in Monday Night Football at Levi's Stadium.

However, it would be San Francisco that would reach their goal thanks to a dominant victory.

The 49ers deployed a formidable defense to shut down Baker Mayfield and company, while Jimmy Garoppolo quietly had one of his best games of this season.

Three takeaways from the 49ers' dominant win over the Browns

Matt Breida has stepped up in place of an injured Tevin Coleman. The running back who went undrafted in 2017 has played a key role in the 49ers' undefeated start, including Monday night when he tallied 114 yards on 11 carries with a blazing fast 83-yard scoring run.

In fact, it was the fastest of any ball carrier over the last three seasons clocked at 22.3 mph.

The threat posed by Breida out of the backfield kept the Browns defense honest and helped Garoppolo, who was incredibly efficient – finishing 20-of-29 passing for 171 yards and two touchdowns.

Breida will see a decrease in touches now that Coleman is healthy again, but the 49ers now have great depth in the backfield as they sit atop the NFC West.

Was this Mayfield's blunder?

It was as much a bad night for Mayfield as it was a good night for the 49ers' defense.

The Browns offense never really got going as Mayfield finished just eight-of-22 passing for 100 yards, no touchdowns and two interceptions. He was also sacked four times, led mostly by the efforts of a now-healthy Nick Bosa who finished with four total tackles, two sacks and a forced fumble.

Mayfield had been hot and cold for the Browns this season heading into Monday's game. He had thrown four touchdown passes through the first four games but tallied six picks, which are tied for second-most in the league. It has not been an ideal start, much less under the bright lights with now four prime-time games and the contest in San Francisco not only put the team's record on the line but also begged the question of whether Mayfield can truly lead the talented Cleveland offense.

Garrett making the case for Defensive Player of the Year

While the 49ers' defense stole the show tonight, Myles Garrett has been making his case on the Browns' defense for Player of the Year.

Against Garoppolo, he had one sack and two total tackles.

Garrett now has seven sacks for the season which makes him the only player with six-plus sacks in each of the last three seasons.

It did not hurt that he was up against rookie left tackle Justin Skule, who took the place of veteran starter Joe Staley after he suffered a broken fibula. Skule received the starting nod for the second consecutive week, but practice did not make perfect in this case as he struggled to contain Garrett. 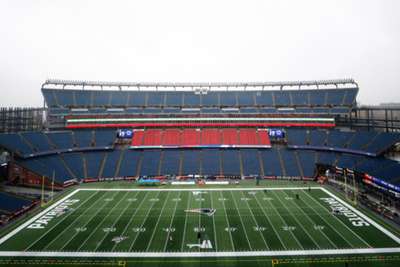 Patriots announce reduced capacity and preliminary protocols
The New England Patriots are planning to play in front of smaller crowds during the NFL season.
Data provided by Opta Sports. Articles provided by OMNISPORT.