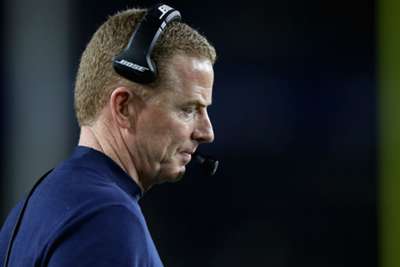 The Dallas Cowboys are not going to start doubting head coach Jason Garrett after suffering their second loss of the season, insists Stephen Jones.

Jones, director of player personnel for the Cowboys, dismissed a question about whether Garrett is on the hot seat after losing back-to-back games to the New Orleans Saints and Green Bay Packers.

Those defeats followed a strong 3-0 start to the season, but Jones insists there are no plans to make a change despite the downturn in fortunes.

"He had the guys playing hard [in Week 5] when it could have gotten really ugly."

If the 3-2 Cowboys can pull off a road win against the winless New York Jets on Sunday and a home victory in an NFC East battle with the Philadelphia Eagles before their Week 8 bye, Garrett just might shut down the noise.

"Just hang in there with us," Jones added. "I really believe we're going to correct these things to be really more consistent. I feel like the best is yet to come."

Garrett, 53, is in his 10th season with the Cowboys, leading Dallas to three division title games in the last five campaigns.

But the team have not won a conference championship during his tenure as they wait for a first Super Bowl appearance since the 1995 season.