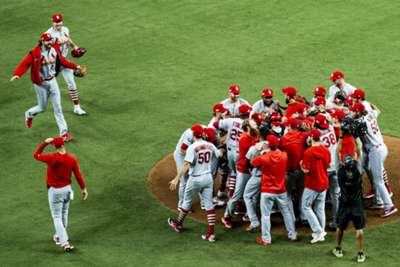 The MLB season is beyond heating up. It's all full force and drama, including a crazy day on Wednesday in which one game was over before the second out was recorded and another required extra innings.

Not all the focus has been on the action, though, as one coach was fired in MLB on Thursday while another was let go in the NFL on Monday.

And the drama continues with the Cleveland Browns, as it has all year long.

All that and more on this week in US Sports.

The National League Championship Series is set, and if you managed to work out the teams involved, you either really know your baseball or you took a crazy guess and happened to be right.

The two participants without home-field advantage won both Game 5's on Wednesday; the Cardinals defeated the Braves 13-1 and the Nationals beat the Dodgers 7-3 in extra innings.

In the matchup between the Braves and the Cardinals, St. Louis scored seven runs before Atlanta recorded a second out in the first inning, and when the dust finally settled on the frame, the Cardinals held a 10-0 lead they were never close to letting get away.

As for the Dodgers and the Nationals, Los Angeles opened a 3-0 lead in the early going, but thanks to back-to-back home runs from Anthony Rendon and Juan Soto off Clayton Kershaw in the seventh, Washington tied the game and forced extra innings.

Howie Kendrick then smacked a grand slam off Joe Kelly with no outs in the 10th and the game was over and done with. And now, in an odd playoff scenario, the Cardinals will have home-field advantage over the Nationals despite having a worse record in the regular season. Why? Because they won their division while the Nationals were the wild-card winner.

2. Gruden fired by Redskins, Tomlin not thinking about job

Jay Gruden was fired by the Washington Redskins after an 0-5 start to the season and made sure everyone knew on his way out that he did not have the kind of say he wanted with the team.

"At the end of the day, if you're not the GM, you have to accept the fact that you don't get everything you want," Gruden told ESPN. "You accept the players given to you. I had input in some areas, but there are some major issues there. It is that way with most coaches. You don't have that total say. It's something you have to overcome and work with the guys you have."

After that a rumour emerged that Redskins owner Dan Snyder was interested in Mike Tomlin for the open job, but the Pittsburgh Steelers coach did not seem too worried about his current job when questioned by the media.

"I am not worried about that, to be quite honest with you. You're the first person to mention it to me in a public setting," he said.

Tomlin continued: "Guys, look: I'm the head coach of a 1-4 football team that’s going on the road to play a Hall of Fame-calibre quarterback with my third quarterback. You think I'm worried about anything this week other than that?"

The Phillies technically got better this year, going 81-81 after going 80-82 in manager Gabe Kapler's first season at the helm in 2018, but that improvement was not enough as Philadelphia announced it had fired the skipper on Thursday.

"Several years ago, I promised our loyal fans that I would do everything in my power to bring a world championship team to our city," owner John Middleton said in a statement. "I will never waver from that commitment.

"During the second half of this season and continuing into this week, I have evaluated our organization extensively, a process that included talking to many people both internally and around the league. Reassuring to me was the endorsement that people outside the Phillies gave to the progress we have made recently, both organizationally and on the field.

"Nevertheless, with the knowledge that I have gained from my evaluation, combined with my personal reflection on the 2019 season, I have decided that some changes are necessary to achieve our ultimate objective."

It is unclear who is next in line for the Phillies, but the team is reportedly after a manager with previous experience. In that case, a guy like Brad Ausmus could be an option after he was fired by the Angels.

For your passion and dedication to the Phillies and the city of Philadelphia. pic.twitter.com/e5t6XomuxF

Well, it's a day of the week, so that means there is drama with the Cleveland Browns.

After the 49ers crushed the Browns on "Monday Night Football", San Francisco cornerback Richard Sherman told NFL Network's Michael Silver he was upset with Cleveland quarterback Baker Mayfield for not shaking his hand in pre-game warmups.

But upon further review, Mayfield did shake Sherman's hand. The cornerback then said it was a petty handshake that ticked him off and has now said he will apologise to Mayfield.

Just another day in Cleveland.