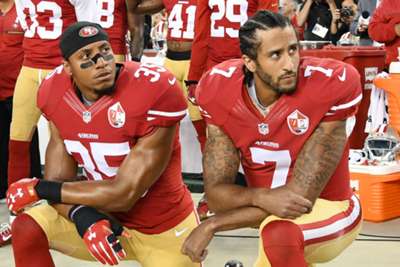 Colin Kaepernick would be immediately ready to play for an NFL team if given the opportunity for which he has waited three years, according to his former team-mate Eric Reid.

Kaepernick remains out of the league, having not played since the end of the 2016 season, during which he stoked controversy by kneeling during the United States national anthem in protest against racial injustice and police brutality.

Reid, who played with Kaepernick for the San Francisco 49ers, kneeled alongside the quarterback and has been one of his most ardent supporters.

They each filed a grievance against the NFL in 2017, accusing owners of colluding to keep them out of the league, but Reid was signed by the Carolina Panthers in 2018. Kaepernick settled his grievance in February of this year.

Kaepernick's representatives released a fact sheet on Thursday in an attempt to address "false narratives" and "set the record straight". The document detailed Kaepernick's many accomplishments with the 49ers, whom he led to Super Bowl XLVII, which they lost to the Baltimore Ravens.

Asked about Kaepernick ahead of the Panthers' game with the Tampa Bay Buccaneers at Tottenham Hotspur Stadium on Sunday, Reid said: "Like his representation said, there's been a lot of false narratives, a lot of things that aren't true about free agency and he wanted to set the record straight."

Reid received a contract extension from the Panthers in the offseason and is not surprised he remains in the NFL while Kaepernick is still in exile, saying: "It's something that we both expected. We didn't think there would be a situation where we'd both be out of work because then it would be too obvious they're blackballing both of us.

"There was a short stint [where we were] both out but I fully expected to be back and I knew it would be more difficult for him to return to the league. He's going to stay ready, he's been doing that over the past three years and he just needs an opportunity."

Pressed on whether Kaepernick would be ready if that chance finally came, Reid replied: "No doubt. He's ready."