Thomas says he was fined $21k for hit on Steelers´ Rudolph 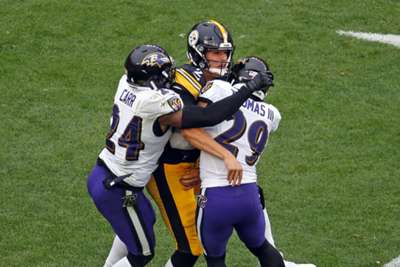 Baltimore Ravens safety Earl Thomas said he has been fined for his hit on Pittsburgh Steelers quarterback Mason Rudolph.

Thomas knocked out Rudolph in Week 5 following a major hit on the Steelers QB.

Baltimore's Thomas told ESPN that he was fined $21,000 for his hit on Rudolph, though he plans to appeal the fine.

Rudolph's status for the Steelers' game against the Los Angeles Chargers on Sunday is unclear as the Oklahoma State product is still in concussion protocol.

Thomas said Rudolph has not responded to his attempts at contacting him this week.

"I wanted to him to know that I didn't do it on purpose," Thomas said. "That's all I wanted him to know."