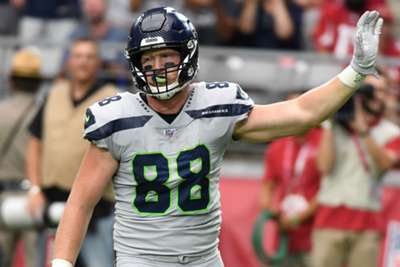 Will Dissly is facing a substantial spell on the sidelines after suffering an Achilles injury during the Seattle Seahawks' game with Cleveland Browns.

The Seahawks' breakout tight end suffered an Achilles injury during the Week 6 match in Cleveland on Sunday, the team have confirmed.

Dissly was ruled out for the remainder of the game and will likely miss substantial time, if not the rest of the season.

It comes as a potential second season-ending injury for Dissly in the space of two years, with the 23-year-old suffering a torn patellar tendon in his right knee in Week 4 of his rookie season.

Will Dissly has an achilles injury, will not return. #Seahawks

Dissly suffered the injury on a non-contact play Sunday. He was cutting in the end zone when he fell to the ground, grabbing his leg.

He had to be helped off the field and, after getting evaluated by medical staff on the sideline, he left on a cart.

Dissly has been one of quarterback Russell Wilson's favourite and most reliable targets, as the team started 4-1.