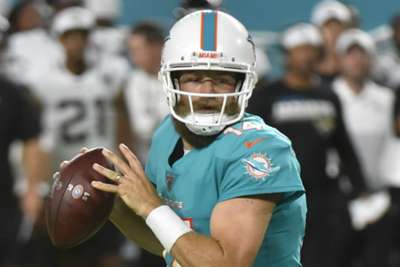 Ryan Fitzpatrick almost became the hero for Miami Dolphins after the veteran quarterback replaced the struggling Josh Rosen against the Washington Redskins.

Fitzpatrick came on with the Dolphins trailing 17-3 heading into the fourth quarter of Sunday's game, but the 36-year-old very nearly inspired Miami to victory.

Having moved the Dolphins 54 yards downfield to set up a Kalen Ballage touchdown shortly after coming into the fray, Fitzpatrick took his team to within a point of the Redskins when he picked out Devante Parker with an 11-yard pass with seconds remaining.

With Rosen – who threw for 85 yards with no touchdowns and two interceptions – watching on, Fitzpatrick looked to have set up a winning two-point conversion when he found Kenyan Drake, only for the running back to fumble as the Redskins held on to win 17-16.

Fitzpatrick finished the day with 12 completed passes out of 18 for 132 yards, one touchdown and no interceptions.

Rosen's demotion to the bench caps a difficult start to the campaign for the 22-year-old, although he has the backing of Brian Flores to be the team's starting quarterback going forward, with the coach reiterating this stance after the game.

Overall, Rosen – who was traded from the Arizona Cardinals in April – has just one touchdown this season. Fitzpatrick had not fared much better, throwing for one touchdown and four interceptions before Sunday's game.

In his rookie season, Rosen threw for 2,278 yards with 11 touchdowns, 14 interceptions and seven fumbles as the Cardinals finished 3-13.