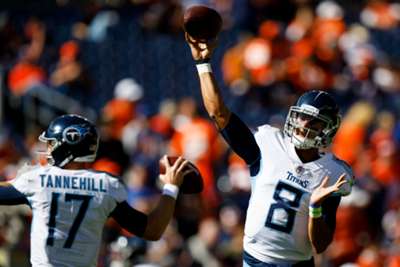 Tennessee withdrew Mariota late in the third quarter of Sunday's NFL clash against Denver, with Tannehill his replacement.

Mariota completed only seven-of-18 passes for 63 yards with two interceptions before getting the hook. The Broncos were leading 13-0 at the time.

The 25-year-old was also sacked three times, highlighting one of the big criticisms against him as he often holds onto the ball too long.

Mariota has never lived up to the huge expectations that came when he was drafted with the second pick in the 2015 NFL Draft.

The Titans acquired Tannehill from the Miami Dolphins via trade in the offseason to back up Mariota, but it now appears he will challenge him for playing time moving forward.