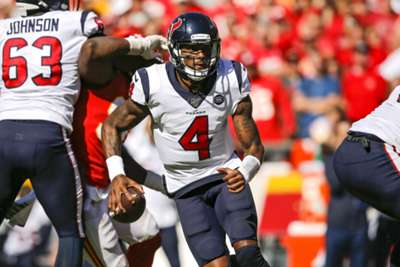 A quarterback duel erupted in Kansas City on Sunday and Deshaun Watson was the signal-caller to come out on top.

The matchup between Watson and the Kansas City Chiefs' Patrick Mahomes pitted two of the NFL's most dynamic quarterbacks against each other and it made for an exciting matchup featuring some big throws and big carries. But ultimately Watson and the Houston Texans came away with a 31-24 win at Arrowhead Stadium.

Thanks, in part, to 21 unanswered points from the Texans in the second quarter. Watson continued to roll and helped put Houston ahead for good with a short one-yard rushing touchdown in the fourth.

Watson finished 30-of-42 passing for 280 yards, one touchdown and two interceptions. He also had 42 rushing yards and two touchdowns on 10 carries.

Reigning MVP Mahomes finished 19-of-35 passing for 273 yards, three touchdowns and one interception for his first pick of the year.

Meanwhile, in Los Angeles, the San Francisco 49ers shut down the Rams offense and had a solid game from quarterback Jimmy Garoppolo to win 20-7 and move to 5-0 for the season.

Quarterback Sam Darnold made a successful return to the line-up as the New York Jets upset the Dallas Cowboys 24-22 for their first victory of the year.

Texans first-round lineman Tytus Howard had to be carted off the field after going down with a knee injury in the second half of the game against the Chiefs.

Seattle Seahawks tight end Will Dissly was carted the field in the first half against the Cleveland Browns with an Achilles injury that could cost him the rest of the season.

Wide receiver Amari Cooper appeared to have reinjured his quadriceps on the Cowboys' opening offensive possession early in the first quarter. He did not return.

Cincinnati Bengals cornerback Dre Kirkpatrick left the game against the Baltimore Ravens with a left knee injury and did not return. Offensive lineman John Miller was also ruled out after suffering a left groin injury.

Denver Broncos receiver Emmanuel Sanders was ruled out against the Tennessee Titans due to a knee injury.

Ravens quarterback Lamar Jackson became the first quarterback to rush for 150-plus yards in a game since Colin Kaepernick ran for 151 yards in 2014.

Kyler Murray is the first quarterback in the Super Bowl era to have 20-plus completions in each of his first six career games.

Seahawks' Russell Wilson finished the win over the Browns with a 117.6 passer rating. He now has a 100-plus passer rating in all six games this season. The only two other players with more 100-plus games to start a season in the Super Bowl era were Tom Brady (eight) in 2007 and Aaron Rodgers (12) in 2011 — both won NFL MVP that season.

Eagles linebacker Zach Brown was mum's the word on Vikings quarterback Kirk Cousins after Philadelphia's 38-20 loss — and Brown called Cousins the "weakest link" earlier in the week: "I'm here to talk about the game. Is there any other questions besides about Kirk Cousins?"

Ron Rivera addressed quarterback Cam Newton's absence, which has seemed less daunting with the success of Kyle Allen, who led the Carolina Panthers to a win over the Tampa Bay Buccaneers in London on Sunday: "I'm not going to speculate on anything until I have to address that. So until then, we're going to stay in the now, stay in the focus of what we're doing right now. As far as I'm concerned, we're not going to deal with the question until it is time... Our quarterback right now playing for us is Kyle. So we're not going to address it."

Buccaneers quarterback Jameis Winston struggled across the pond, with five interceptions and a lost fumble, and head coach Bruce Arians wanted to make one thing clear: "Throw the damn ball away. You avoided one, you might've avoided two. You ain't throwing it anywhere — to a receiver. Throw it away."