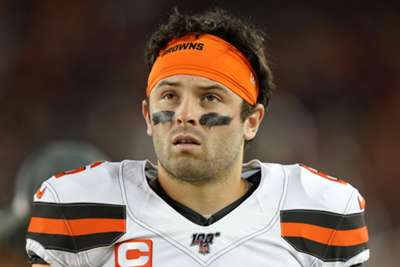 The Browns dropped to 2-4 for the NFL season after going down 32-28 to the Seahawks on Sunday, and Mayfield has continued to struggle in 2019.

Mayfield gave up three interceptions to Seattle, and first-year Brows boss Kitchens told reporters on Monday that he would like the QB to make smarter choices.

"I think each and every interception kind of has its own story," Kitchens said. "To simply answer your question, I want Baker to continue to work to make better decisions and then we need to work around him to make sure that we are where we are supposed to be, how we are supposed to be there, catching balls and all those things.

"I have said it from the beginning that quarterback play is dictated so much by the people around him, being on the same page, being where you are supposed to be, how you are supposed to get there and things like that. We need to make sure that Baker is continuing to get better with his eyes, his reads and his throws."

Mayfield leads the league in interceptions with a total of 11 through Week 6 and has completed a lowly 56.6 per cent of his passes in 2019.

Kitchens is taking some of the blame for Mayfield's lack of production though, and wants to give the quarterback more quality opportunities.

Mayfield has an elite receiving corps that includes Odell Beckham Jr. and Jarvis Landry at his disposal. But the two wideouts have combined for 875 yards and one score in 2019 and have not quite lived up to expectations.

The Browns – who have not made the postseason since 2002 – have a bye this week and will get a chance to sort out their problems before facing the undefeated New England Patriots (6-0) on October 27.