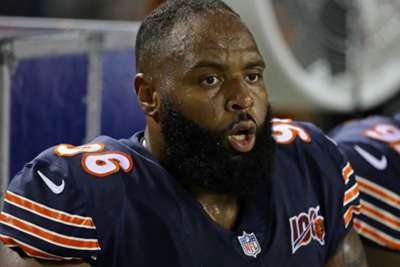 The Chicago Bears have been dealt another blow after defensive tackle Akiem Hicks was placed on injured reserve.

Hicks initially suffered his elbow injury in Chicago's Week 5 loss to the Oakland Raiders in London and is now ruled out for at least the next eight weeks.

The move comes one day after the team placed right guard Kyle Long on injured reserve as he continues to deal with a lingering hip issue.

Hicks, who has six tackles, one sack, one fumble recovery and one tackle-for-loss through four games this season, previously missed time in 2018 with a knee injury.

The 29-year-old earned the first Pro Bowl selection of his career last year when he had 7.5 sacks, three forced fumbles and 55 tackles while starting in all 16 games for the third straight season.