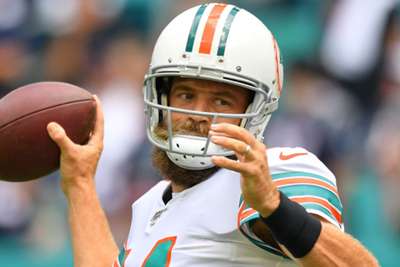 The Fitzmagic is officially back in Miami.

Miami Dolphins coach Brian Flores announced on Wednesday that Ryan Fitzpatrick will start this week against the Buffalo Bills.

The move keeps second-year quarterback Josh Rosen on the bench after he was pulled for veteran Fitzpatrick in the Week 6 loss to the Washington Redskins.

Flores had given his backing to Rosen, who replaced Fitzpatrick in Week 3, following the game against the Redskins but he now loses his place.

"We're going to start Fitz this week," Flores said. "We kind of came to that conclusion over the last couple of days.

Ryan Fitzpatrick will start at Buffalo on Sunday.

"And we do that on a weekly basis. What's the best grouping, set of players, offense, defense, kicking game to help try to win the game? We felt that was the case this week."

Rosen threw for 85 yards, no touchdowns and two interceptions against Washington before Fitzpatrick replaced him at the beginning of the fourth quarter.

The 36-year-old then completed 12 of 18 passes for 132 yards with one score and no picks as he almost led the Dolphins to a dramatic first win of the season.