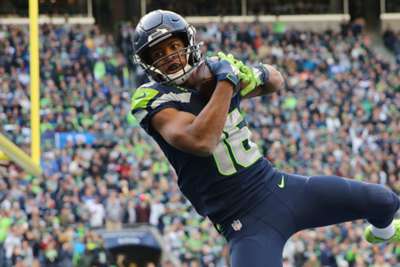 Tyler Lockett's leg injury should not be a significant concern going forward, coach Pete Carroll has said in a huge boost for the Seattle Seahawks.

He was taken to a Bay Area hospital when the Seahawks' medical staff were concerned over how swiftly the swelling was developing, with fears it could be compartment syndrome.

Lockett remained in hospital overnight but, in a positive update on Tuesday, Carroll explained the stay was precautionary and that he does not see the injury causing many availability issues, particularly with Seattle (8-2) now on a bye week.

"It should be okay, it shouldn't be a big problem going forward," Carroll said to 710 ESPN Seattle.

"There's concern there could be some complications when you have something like that."

The NFL Network reported Lockett's injury is more of a bad shin bruise that swelled rather than anything more serious.

Lockett has been a pivotal player for the Hawks this season, becoming Russell Wilson's most trusted target and hauling in 62 catches for 793 yards and six touchdowns through 10 games.

Always gotta believe something good is just about to happen!!

What a finish!!! What a win!!! #GoHawks pic.twitter.com/vVo0tgqDeO