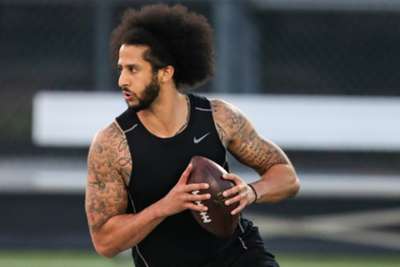 Colin Kaepernick accomplished his goal and proved he can still play, according to former San Francisco 49ers team-mate Eric Reid.

Ex-49ers quarterback Kaepernick completed a rearranged workout in Atlanta on Saturday as the outcast eyes a return to the league.

Kaepernick has been out of the NFL since the end of the 2016 season, during which he attracted controversy by kneeling for the United States national anthem in protest against racial injustice and police brutality.

He filed a grievance against the NFL in 2017, accusing owners of colluding to keep him out of a job. Kaepernick reached a settlement in February of this year.

"The goal was accomplished," Carolina Panthers safety Reid, who attended the workout, said following Sunday's loss to the Atlanta Falcons. "He proved he can play this game. He proved he can throw the ball. Elite. That's what an NFL executive said."

Reid, who kneeled alongside Kaepernick in 2016 and also filed a grievance against the league but was signed by the Panthers in 2018, said the workout felt like a "PR stunt" prior to Saturday.

He maintained that view on Sunday, adding: "We knew this was a PR stunt from the beginning. When we got that waiver we were like, 'Ah, we see that. It's the employment rights. You want him to forfeit his employment rights'.

"They've never had Colin's best interests at heart. If that was the case, why are they making such a big deal about moving the workout?"

The NFL organised a workout for Kaepernick at the Atlanta Falcons training facility, which it said 25 clubs were set to attend.

However, a session initially scheduled for 15:00 local time (20:00 GMT) was relocated and pushed back to 16:00, with Kaepernick's representatives slamming the NFL for not providing "a legitimate process" and not allowing members of the media to attend and film the workout.

Members of the media did attend the rearranged workout, with hordes of Kaepernick's supporters also intently watching the session, which was streamed on YouTube.

"He's been working out every day for three years," Reid said. "Can you imagine the mental fortitude it takes to stay in shape for three years while somebody is blackballing you for you wanting to stand up for people who have been wronged?"