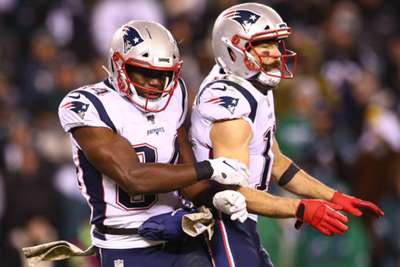 The New England Patriots and San Francisco 49ers bounced back to improve to 9-1 in the NFL on Sunday.

Coming off losses in their previous matches, the Patriots and 49ers overcame the Philadelphia Eagles and Arizona Cardinals respectively.

Meanwhile, the struggling Cincinnati Bengals became the first team to be officially eliminated from play-off contention, while the Los Angeles Rams were too good for the Chicago Bears.

Super Bowl champions the Patriots needed 17 unanswered points to get past the Eagles 17-10.

The Patriots held on as the fourth quarter finished scoreless, keeping them clear atop the AFC East.

The Eagles (5-5) are second in the NFC East but lost ground to the Dallas Cowboys, who edged the Detroit Lions earlier in the day.

The 49ers rallied to bounce back from their loss to the Seattle Seahawks, edging past the Cardinals 36-26.

San Francisco fell 16-0 behind and then trailed 26-23 in the final minute after a 22-yard run from Kyler Murray put the Cardinals back ahead.

However, Jimmy Garoppolo – who finished 34 of 45 for 424 yards and four TDs – found Jeff Wilson with just 31 seconds remaining before a late D.J. Reed score.

The 49ers are top of the NFC West, while the Cardinals (3-7-1) have lost four straight.

RAIDERS GET PAST BAD BENGALS

Derek Carr led the Raiders past the Bengals 17-10, completing 25 of 29 passes for 292 yards and a TD while also rushing over for a score.

You love to see it.@derekcarrqb makes some absolute MAGIC on third and goal. #CINvsOAK pic.twitter.com/TUjTeZmQ7g

Josh Jacobs rushed for 112 yards for the Raiders, who are 6-4 after winning three straight games.

They have the same record as Kansas City as the Chiefs prepare to face the Los Angeles Chargers on Monday.

The Indianapolis Colts (6-4) relied on their running game to beat the Jacksonville Jaguars 33-13.

The Colts ran the ball 36 times for 264 yards at an average of 7.3 yards per carry. It was the 12th highest total in team history and their best since 2004, according to Colts.com.

"I don't think you ever expect to run for that many yards in an NFL game, just 'cause defenses are too good," Colts head coach Frank Reich said.

"And I've got so much respect for that defense. I'm just telling you. I was telling Nick [Sirianni, Colts offensive coordinator], I got over here this morning, I said, 'Man, I know we're gonna run the ball, we're gonna call runs, we're gonna stay committed to it, our guys have had a great week of practice, but this is a good defensive front.' So, again, I can't give our players enough credit for how well they played."

The New Orleans Saints improved to 8-2 thanks to a 34-17 win over the Tampa Bay Buccaneers.

Saints head coach Sean Payton was pleased with his team, who were led by Drew Brees' three TD passes as they responded to their loss to the Atlanta Falcons.

"It wasn't our best game but I felt like there were a lot of good things to win. Too many penalties, we had a touchdown brought back, third down conversion brought back, and we gave up a couple plays big on defense," he said.

"We still think that we have better football ahead of us, but I was proud of how we responded form last week. The guys had a good week of practice and I think it carried over into this game."