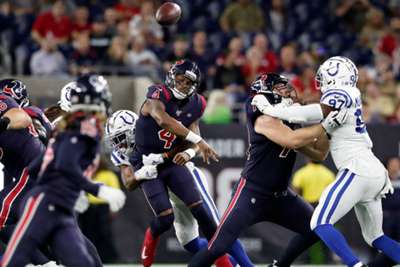 The Houston Texans claimed sole possession of first place in the NFL's AFC South with a 20-17 victory over the Indianapolis Colts.

Deshaun Watson and DeAndre Hopkins starred as the Texans (7-4) moved clear in the AFC South on Thursday.

Texans quarterback Watson threw two touchdown passes to Hopkins and finished with 298 yards against the Colts (6-5).

The Texans, who were humbled 41-7 by the Baltimore Ravens last week, trailed by four points early in the fourth quarter in Houston.

But the Texans rallied – Hopkins stretching out for a 30-yard reception as Houston moved 20-17 ahead of Indianapolis.

Houston's defence then stepped up and stopped the Colts on fourth-and-seven with three minutes remaining.

There was some late controversy 50 seconds from the end, when Watson ran the ball and had it punched out.

The Colts appealed for the recovered fumble but there was no review and the Texans kept the ball, eventually running out the clock.

After the game, the NFL said, "there was no clear visual evidence of a recovery by the defence".

Colts quarterback Jacoby Brissett was 16 of 25 for 129 yards, while he rushed for a touchdown.