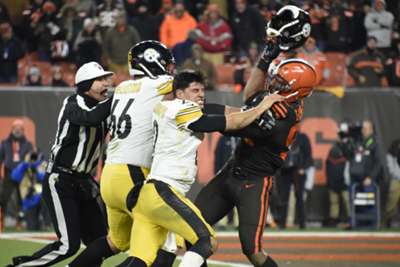 Pittsburgh Steelers quarterback Mason Rudolph received a $50,000 fine for his role in the brawl with the Cleveland Browns.

Browns defensive end Myles Garrett was suspended for at least the rest of the season by the NFL after he hit Rudolph over the head with the Steelers QB's helmet in the closing seconds of last Thursday's Week 11 encounter between the two teams.

Rudolph, who escaped suspension, was slapped with the largest sum as 33 players were fined by the NFL on Saturday.

Earlier this week, Rudolph said: "Should have done a better job of keeping my cool in that situation and in retrospect I put Maurkice Pouncey - probably one of the best team-mates I've ever had - in a tough spot, as well as my team-mates.

"The way I saw it, on the final play of the game, with the game in hand the way it was, we had already lost two of our players for targeting penalties and as I released the ball, I took a late shot, did not agree with the way he took me to the ground and my natural reaction was just to get him off from on top of me.

"Again, I should have done a better job handling that situation. I have no ill-will towards Myles Garrett, great respect for his ability as a player and I know if Myles could go back, he would handle the situation differently.

"As for my involvement last week, there is no excuse, the bottom line is I should have done a better job keeping my composure in that situation and I fell short in what I believe it means to be a Pittsburgh Steeler and a member of the NFL."

The Browns face the Miami Dolphins on Sunday, while the Steelers take on the Cincinnati Bengals.