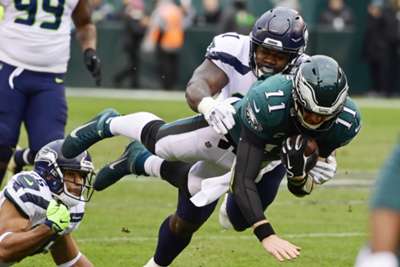 Carson Wentz had a Sunday to forget as the Philadelphia Eagles were beaten 17-9 in an NFC battle with the Seattle Seahawks, while Frank Gore moved third on the all-time NFL rushing list.

The injury-hit Eagles really needed a win to put pressure on NFC East leaders the Dallas Cowboys, but fell to 5-6 after quarterback Wentz and the Philadelphia offense failed to fire in Week 12.

Second-placed Seattle are 9-2 in the NFC West after improving their perfect record on the road to 6-0, Rashaad Penny playing a huge part in their fourth consecutive win.

Gore moved past Barry Sanders on the list of the leading rushers in a 20-3 victory for the Buffalo Bills over the Denver Broncos.

Wil Lutz's last-gasp field goal snatched a 34-31 win for the New Orleans Saints over the Carolina Panthers, while Pittsburgh Steelers quarterback Mason Rudolph was benched in a 16-10 success against the Cincinnati Bengals.

WENTZ UNABLE TO GET EAGLES SOARING

Eagles signal caller Wentz's critics were out in force again after he was 33 of 45 for 256 yards, with one touchdown.

There were also two interceptions and a couple of lost fumbles for the 26-year-old, who was also reportedly checked out for a hand injury.

Wentz threw a TD pass to Zach Ertz in the final minute, but the damage had already been done.

Seattle running back Rashaad Penny ran for a career-best 129 yards, including a 58-yard touchdown, while MVP contender Russell Wilson was sacked six times but was 13 of 25 for 200 yards, with one TD and one pick.

Star running back Gore moved beyond Hall of Famer Sanders' tally of 15,269 yards with a seven-yard dart in the fourth quarter of a victory for the Bills.

Gore made 65 yards in 15 carries and took his career total to an astonishing 15,289 yards.

Buffalo are 8-3 in the AFC East behind the New England Patriots, while the struggling Broncos are 3-8 at the foot of the AFC West.

Joey Slye missed a field goal at the other end from 28 yards out with two minutes to play, but Lutz held his nerve with a 33-yard kick.

Two attempts from Christian McCaffrey were in vain as Drew Brees completed 30 of 39 passes for 311 yards and three touchdowns in a captivating contest.

Rudolph was fined $50,000 for his part in an ugly brawl late in a defeat to the Browns last week.

Browns defensive end Myles Garrett ripped off Rudolph's helmet and hit him on the head with it as things got out of hand in Week 11.

Steelers quarterback Rudolph escaped a ban, but he was sidelined during the clash with the sorry Bengals when Devlin Hodges replaced him during the third quarter.

Hodges wasted no time in making an impact, picking out James Washington for a 79-yard catch-and-run touchdown as the Bengals suffered yet another loss to go 0-11.