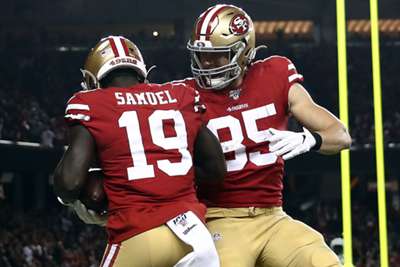 The San Francisco 49ers continued to impress in the NFL on Sunday, while the New England Patriots scraped past the Dallas Cowboys.

Also 10-1 are the Patriots, who edged the Cowboys in rainy conditions at Gillette Stadium.

There was also a big win for the Tennessee Titans over the Jacksonville Jaguars.

San Francisco contained Rodgers, who was sacked five times and had just 104 passing yards and a TD on 20 of 33 completed passes.

49ers quarterback Jimmy Garoppolo was far better, throwing two touchdown passes and for 253 yards after completing 14 of 20, while George Kittle had 129 receiving yards and a TD.

The quarterback's 10-yard pass to N'Keal Harry in the first quarter gave the Patriots a lead their defense were able to protect.

New England's defense is comfortably the best in the NFL so far this season, conceding just 117 points in 11 games. The 49ers (163 in 11) are the second best.

Cowboys quarterback Dak Prescott went 19 of 33 for 212 yards and an interception, while Ezekiel Elliott rushed for 86 yards on 21 carries.

All the best moments from tonight's win in Foxboro. #DALvsNE game highlights: https://t.co/FnVNv56CR3

TANNEHILL, TITANS PILE IT ON

The Titans scored 28 points in the third quarter of a 42-20 victory over the Jaguars.

A second straight win helped the Titans improve to 6-5, the same record as the Indianapolis Colts in the AFC South, which is led by the Houston Texans (7-4).

Titans QB Ryan Tannehill threw two TD passes on the back of 14 of 18 completed passes for 259 yards, while he also rushed for two scores.

"We continue to find a way to win when we are not really playing our best. It is a big team win and now we are off to a short week in Atlanta," Lutz said.

"I actually didn't hit the ball too well. My heart kind of sank a little bit to be honest. At the end of the day it was good [win] and a nice win."

Frank Gore moved into third for all-time rushing yards in the NFL during the Buffalo Bills' 20-3 win over the Denver Broncos.

"For me it was tough to get to the NFL. I've been doubted my whole career. I tore my two ACLs and a lot of people said you will be here only two or three years and now in my year 15 I'm still having fun and still making plays, still helping a team win games."