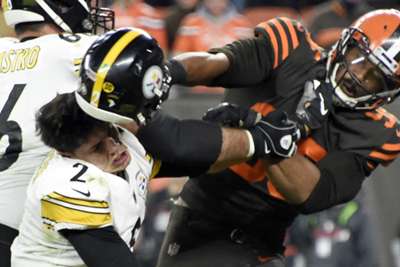 Mason Rudolph said he "couldn't believe" Myles Garrett accused him of making a racial slur prior to the brawl between the Pittsburgh Steelers and Cleveland Browns.

The NFL suspended Browns defensive end Garrett for at least the rest of the season after he hit Rudolph over the head with the Steelers quarterback's helmet in the closing seconds of the Week 11 encounter between the teams.

Garrett reportedly claimed in a disciplinary hearing that Rudolph made a racial slur against him in the build-up to their altercation.

An NFL investigation found no evidence to support the allegation but Garrett stood by his assertion in a social media statement, writing: "I know what I heard".

Rudolph addressed reporters after Sunday's game against the Cincinnati Bengals and insisted the allegation was unfounded.

Asked if he had said anything that Garrett could have interpreted as a racial slur, Rudolph responded: "Absolutely not. There was nothing. Not even close."

Rudolph was benched after throwing eight of 16 for 85 yards and one interception during the Steelers' 16-10 win over the Bengals.

Pittsburgh's next game is against the Browns at Heinz Field.