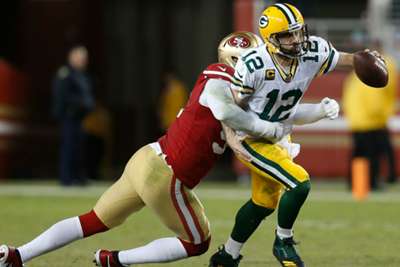 Matt LaFleur labelled the Green Bay Packers' display in their 37-8 defeat to the San Francisco 49ers "unacceptable" and "concerning".

Green Bay are now in a tie atop the NFC North with the Minnesota Vikings - both teams owning an 8-3 record - after managing just 198 yards and a one-of-15 third-down conversion rate at Levi's Stadium.

And while clashes with the New York Giants and Washington Redskins should allow the Packers to get back on track in the next couple of weeks, first-year coach LaFleur knows he and his team must improve on their San Francisco display.

He said: "I'm disappointed with myself, how we got outcoached, outplayed.

"Bottom line, it's unacceptable and we've got to look at ourselves and there's a lot to correct if we want to be the team we want to be.

"There was a lot of stuff today that was concerning, quite frankly. We've got to man up, look at stuff critically and we've got to be honest with ourselves.

It's the second defeat inside a month in California for the Packers, who were beaten 26-11 by the Los Angeles Chargers on November 3 but star quarterback Aaron Rodgers is confident they will turn it around.

"I think both games we were bad on third down and tonight we were terrible on third down. We didn't do a good job establishing the run in both games.

"We didn't play very physical tonight. We obviously didn't execute. But I felt good about the energy pre-game and the approach. We had a good week of practice which is why it's so surprising, the performance.

"We have the make-up to bounce back from these kinds of things and put ourselves in a position to potentially come back here and play again."