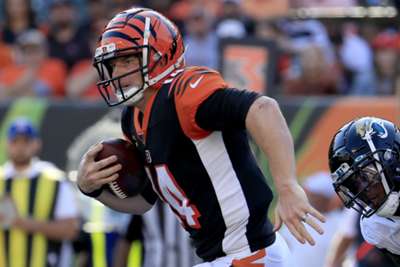 The Cincinnati Bengals have reinstated Andy Dalton as their starting quarterback to face the New York Jets on Sunday.

Dalton was benched after the Bengals' 24-10 defeat to the Los Angeles Rams in Week 8, prior to the team's bye.

Rookie Ryan Finley has played in the last three games, but there has been no upturn in results as Cincinnati - beaten 16-10 by the Pittsburgh Steelers at the weekend – have slipped to 0-11 for the season.

Prior to his demotion, Dalton had started every Bengals game when healthy since the opening week of his rookie season in 2011.

Cincinnati coach Zac Taylor said: "It was not an easy decision [to switch quarterbacks] any time we've had to make it, which has been twice this year.

"But it's in the best interests of the football team to do this and get Andy back out there."

Finley completed 47.1 per cent of 87 pass attempts for 474 yards, with two touchdowns and the same number of interceptions. He failed to amass more than 200 passing yards in any of his appearances, though, and was also sacked 11 times.