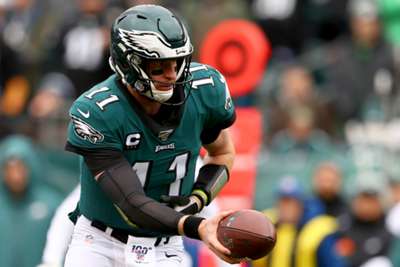 Carson Wentz is recovering from a bruised throwing hand but Philadelphia Eagles head coach Doug Pederson expects his quarterback to be fine for the Miami Dolphins game.

Wentz hurt his right hand as the Eagles were beaten 17-9 by the high-flying Seattle Seahawks in NFL action on Sunday.

The under-fire QB finished 33 of 45 for 256 yards, a touchdown and four turnovers – two interceptions and two lost fumbles – as the Eagles fell to 5-6.

Following further testing on Monday, Pederson told reporters: "He's got a little bruise in his hand, kind of on the middle finger there. Day to day, should be fine for the game."

Asked if Wentz will miss any practice time ahead of Sunday's clash with the Dolphins, Pederson replied: "No".

Matthews re-signed with the Eagles on November 11 and played two games – contributing 33 yards on four receptions.

The 27-year-old was initially drafted by the Eagles in 2014 before stints with the Buffalo Bills and New England Patriots prior to his Philadelphia return in 2018.

Matthews was signed by the San Francisco 49ers in March, but he was released in October, leading to a brief reunion with the Eagles.