Lamar Jackson is ´one of a kind´, says Weddle 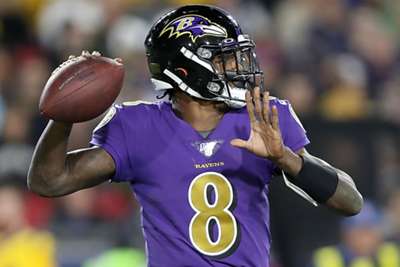 Lamar Jackson was called "one of a kind" by Eric Weddle after the Baltimore Ravens quarterback boosted his MVP bid by throwing five touchdowns in the 45-6 rout of the Los Angeles Rams.

Second-year star Jackson led the Ravens to touchdown drives on each of his six full offensive series, going 15 of 20 for 169 yards through the air and adding a further 95 yards on eight carries on the ground.

He was taken out in the fourth quarter with the game long out of hand as the Ravens improved to 9-2 with a demolition of the Rams, who fell to 6-5 and saw their playoff aspirations dented.

Weddle, who spent last year in Baltimore with Jackson, admitted the Rams were blown away by a Ravens offense that put up 480 yards of total offense.

"When you get on the field and you get to the speed of what they run, it's tough," Weddle said, in quotes published on the Los Angeles Times' website.

"I mean, some of the plays I didn't know who had the ball because they run it so efficiently.

"[Jackson] is one of a kind; he's pretty special."

The 39-point margin of defeat represented the Rams' biggest ever loss at the Coliseum and Weddle admitted his team failed to deal with Baltimore's brilliant rushing attack.

"These guys are just coming down hill and doubling and getting extra gaps and you're trying to figure out what's going on," he added.