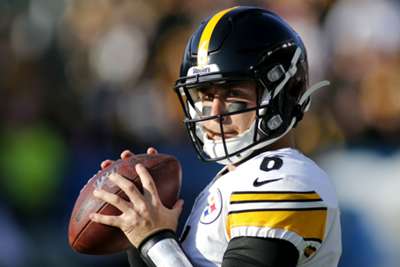 Devlin Hodges will replace a struggling Mason Rudolph as the Pittsburgh Steelers' starting quarterback against the Cleveland Browns on Sunday.

Hodges came on to win the game for the Steelers after Rudolph was benched at half-time during a 16-10 success over the beleaguered Cincinnati Bengals last weekend.

Coach Mike Tomlin on Tuesday announced that the undrafted rookie will start the Week 13 showdown against the 5-6 Browns at Heinz Field.

Asked why he had selected Hodges, Tomlin simply replied: "He has not killed us."

Tomlin added: "We met as a staff, and we decided we're going to start Duck [Hodges' nickname] this week," said Tomlin.

"And really, the decision is clear for us, and there are some really clear reasons why. Like I talked about after the Bengals game, I thought he provided us a spark in-game, and I'm hopeful he’s capable of continuing to provide that spark as we step into this stadium."

In his weekly press conference, Coach Tomlin announced that Devlin Hodges would start at quarterback versus the Cleveland Browns on Sunday.

Rudolph's ineffective display on Sunday came after he was involved in an ugly melee during a Week 12 defeat to the Browns.

Browns defensive end Myles Garrett was handed an indefinite suspension - ruling him out until the rest of the season at least - after he ripped Rudolph's helmet off and hit him over the head with it in the closing stages of the game.

Rudolph was fined $50,000 for his part in the altercation, but denied accusations from Garrett that he directed a racial slur at him.

The second-placed Steelers are 6-5 in the AFC North, with five wins from their last six games.