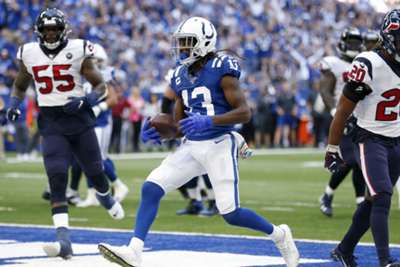 T.Y. Hilton has been ruled out of the Indianapolis Colts' Week 13 encounter with the Tennessee Titans after suffering a setback on his comeback from a calf problem.

The star receiver – a third-round draft pick by the Colts in 2012 – missed three weeks due to a calf injury earlier in the campaign.

The 30-year-old returned to action in Week 12 against the Houston Texans but made two crucial drops which ultimately cost the Colts in a 20-17 defeat.

"I've got to make that," Hilton said. "That's what I get paid for. I've gotta make it. I let my team down today. One hundred percent on me."

Per GM Chris Ballard, T.Y. Hilton suffered a setback with his calf injury, and has been ruled out for #TENvsIND.

But there was more bad news for the Colts and Hilton on Thursday, with general manager Chris Ballard confirming the receiver would miss Sunday's clash with the Titans.

It is a major blow for the Colts, who are 1-7 without Hilton in their starting line-up, with the receiver now considered "week-to-week".