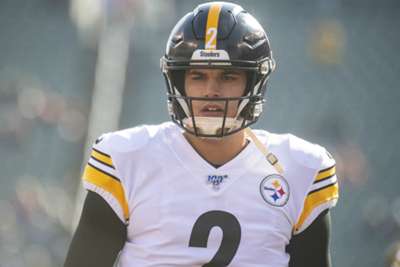 Pittsburgh Steelers quarterback Mason Rudolph said he has taken a "team-first attitude" after being dropped for the upcoming NFL clash with the Cleveland Browns.

The Steelers have turned to Devlin Hodges over struggling QB Rudolph for Sunday's visit of the Browns at Heinz Field in Pittsburgh.

Hodges came on to win the game for the Steelers after Rudolph was benched at half-time during a 16-10 success over the Cincinnati Bengals last week.

Rudolph, however, told reporters on Thursday: "You handle it with a good attitude, with a team-first attitude.

"I can only control how I react and how hard I prepare, knowing that I'm one play away. I'm going to support the guy, knowing that this is a crazy game and you've got to be ready when your number is called. I will be ready, for sure."

Happy Thanksgiving from our family to yours! pic.twitter.com/ZRvcpL3Awa

"I'd been benched once in college for a half and once in high school," Rudolph continued. "So yeah, there's some past experiences you do draw from. I conquered that, and I think I'll conquer this the same way. Just going to be a matter of staying true to myself and believing in myself and staying in the fight."

Rudolph's demotion comes after he was involved in an ugly melee during a Week 11 loss to the Browns.

Browns defensive end Myles Garrett was handed an indefinite suspension – ruling him out until the rest of the season at least – after he ripped Rudolph's helmet off and hit him over the head with it in the closing stages of the game.

On Steelers head coach Mike Tomlin's decision to start with Hodges, Rudolph added: "He said this isn't his final decision, and any player wants a chance to play every week.