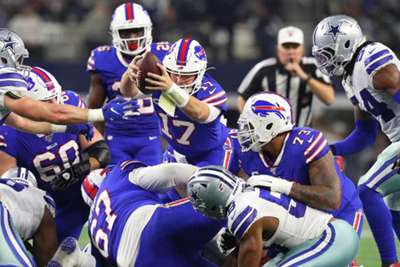 The Buffalo Bills claimed Thanksgiving honours after beating the Dallas Cowboys 26-15, while the Chicago Bears trumped the Detroit Lions late.

John Brown became the first Bills receiver to throw a touchdown pass as in-form Buffalo improved to 9-3 for the NFL season on Thursday.

Making their first Thanksgiving appearance in 25 years, the Bills overcame a 7-0 first-quarter deficit to see off the struggling Cowboys.

Bills quarterback Josh Allen ran for a touchdown and threw a TD pass to Cole Beasley, who finished with 110 receiving yards in his first game against his former team.

Allen was 19 of 24 for 231 yards to help the streaking Bills to their third consecutive victory, solidifying the team's hold on the AFC wild-card position.

The Cowboys (6-6), who scored a touchdown on their opening drive against the visiting Bills, lost for the sixth time in nine games.

Earlier in the day, quarterback Mitchell Trubisky helped the Bears to a 24-20 win over the Lions in Detroit.

Trubisky threw a go-ahead, three-yard pass to David Montgomery with just over two minutes remaining to lift the Bears.

It was a forgettable outing for the Lions (3-8-1), who were condemned to a fifth straight defeat.

With Matthew Stafford and Jeff Driskel sidelined, rookie Lions quarterback David Blough was 22 of 38 for 280 yards and two touchdowns.