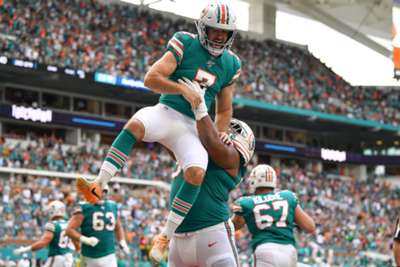 The Eagles went 10-0 up early on but fell behind in the second quarter after being bamboozled on a fourth-and-goal when Miami shifted out of field goal formation before punter Matt Haack took a shotgun snap, moved to his left and threw a shovel pass to kicker Jason Sanders in the end zone.

Though Philadelphia regained the lead going into the interval, the Dolphins scored 23 unanswered points in the second half to improve to 3-9 in the NFL.

Explaining the trick play and the unusual formation, Flores told reporters: "It was a fake we've worked on for a few weeks and we felt like that was a good time to run it.

"It gave us a spark. That one worked and gave us a lot of momentum.

"They don't all work, obviously. It's something we practiced and we executed it well.

Sanders became the first kicker to catch a touchdown pass in the NFL since 1977 with his score.

Meanwhile, Haack, whose only other passing attempt in the league was intercepted, revealed the defensive look Philadelphia gave Miami allowed the play to work as intended.

"My rookie year I threw an interception on a fake punt... A lot better feeling on this one," he said.

"It's not something you get to experience every day. It was a fun play, glad we got it executed and got the win.

"It's something we've been working on for a long time. We've seen a few different looks in practice, what we liked, what we didn't like. They gave us honestly exactly what we planned for so that was pretty cool.

"It felt so fast. Four guys on me just real quick. I saw a little window and he was wide open so I had to just put it on him, give him a chance."