I had to get at least one win over the GOAT! - Deshaun Watson relishes beating Tom Brady 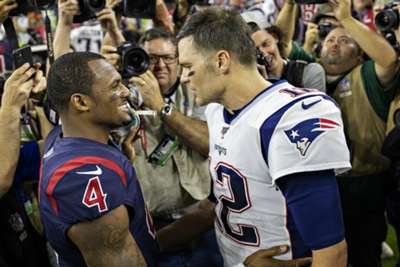 Deshaun Watson labelled Tom Brady the greatest of all time and explained he had achieved a career goal after inspiring the Houston Texans to victory over the New England Patriots.

Houston (8-4) earned a famous 28-22 win against the Patriots (10-2) on Sunday and the teams may end up doing battle once more in the playoffs.

Watson, 24, had lost his first two meetings with fellow quarterback Brady, 42, but completed 18 of 25 passes for 234 yards, three touchdowns and zero interceptions to triumph this time around.

It was a memorable night for Watson as he also caught a TD pass himself from wide receiver DeAndre Hopkins, with the Texans making it back-to-back wins.

Prior to the contest, the Pats' dominant defense had only allowed four passing TDs in 11 games and collected 15 interceptions, but Watson's display confounded those statistics.

"That's the GOAT," Watson said of Brady in an interview with NBC. "It's special for me - before he hangs it up I had to at least get one [win].

Watson also discussed beating Brady at his post-match media conference, with the Texans on a roll ahead of next week's home game against the Denver Broncos.

"As far as big wins, honestly, it's pretty big," he said.

"Really just because it's Brady. I was 0-2 against Brady and who knows when he's going to hang it up.

"That's my role model, a guy that's been doing it forever, over 20 years. I'm only alive for 20 years. It's pretty awesome to finally get one."

Brady and Watson talked on the field after the game and the Texans QB added: "He just congratulated me, said keep going, stay healthy.

"We'll be in touch. We're going to talk this offseason. Definitely a resource that he's going to give an opportunity to check in and learn from him. I'm definitely going to take it.

"Just to see the love and respect we have for each other. It was big. It was awesome.

"The win builds our confidence, it builds the momentum for us to continue to try to push on. It shows us and shows the world that we can play with anyone on any given day if we come out and play."

FINAL: @HoustonTexans defeat the Patriots and improve to 8-4! #WeAreTexans #NEvsHOU