Seahawks hold off Vikings to go top of NFC West 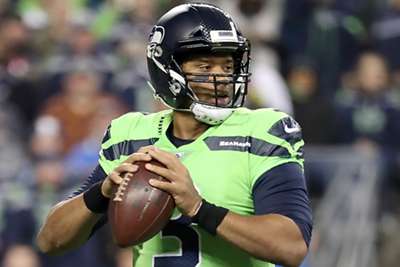 The Seattle Seahawks moved top of the NFC West after beating the Minnesota Vikings 37-30 to extend their winning streak to five on Monday.

The Seahawks held off the Vikings at CenturyLink Field, where 24 unanswered points to begin the second half proved crucial for Seattle.

Russell Wilson (21 of 31 completed passes for 240 yards, two touchdowns and an interception) helped the Seahawks improve to 10-2 and move above the San Francisco 49ers (10-2) in the NFC West.

Vikings quarterback Kirk Cousins completed 22 of his 38 passes, also finishing with two TDs and an interception, along with 276 yards.

But the loss dropped Minnesota – who had star running back Dalvin Cook suffer a shoulder injury – to 8-4, leaving them second to the Green Bay Packers (9-3) in the NFC North.

The Vikings and Seahawks traded touchdowns in the first quarter as Cook and Chris Carson rushed over for their respective teams.

Minnesota scored again with a wild TD in the second quarter, Wilson's pass blocked before the ball bounced around in the air and Anthony Harris scored.

One of the craziest Pick-6s you’ll ever see.

Anthony Harris to the  for ! @HOOSDatDude #SKOL

Field goals from Jason Myers and Dan Bailey meant the Vikings took a 17-10 lead into half-time.

But Seattle dominated the third quarter, with Rashaad Penny rushing over to complete a nine-play, 71-yard drive.

Myers' 29-yard field goal put the Seahawks ahead before Wilson delivered a 60-yard TD pass to David Moore to make it 27-17.

Penny scored again to begin the fourth quarter, only for Cousins' 58-yard pass to find a wide open Laquon Treadwell for a TD that gave the Vikings a chance.

A brilliant fake punt by Seattle which gained 29 yards looked set to halt Minnesota's momentum, but the Vikings responded.

An eight-play, 72-yard drive ended with Cousins finding Kyle Rudolph in the end zone, but Bailey missed the extra-point attempt and Myers sealed the Seahawks' win in the final minute.