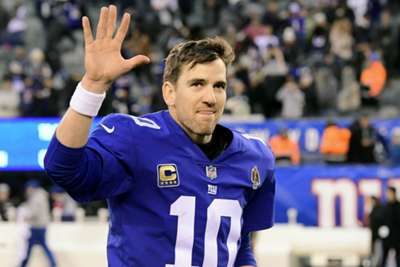 Eli Manning is "very likely" to start at quarterback for the New York Giants against the Philadelphia Eagles due to Daniel Jones' injury, the team have announced.

Two-time Super Bowl champion Manning, 38, began the season under center for the Giants but lost his place after Week 2 to rookie Jones, a surprise sixth overall pick in the 2019 NFL Draft.

Jones led New York to back-to-back wins in his first two professional games, but the team have lost eight straight since, falling to 2-10.

The 22-year-old has passed for 18 touchdowns and 11 interceptions this year, along with two rushing scores.

But coach Pat Shurmur revealed on Wednesday, according to the Giants' official website, Jones has a moderate high ankle sprain.

Manning is therefore in line for a return against NFC East rivals the Eagles on Monday, having passed for two touchdowns and two interceptions through two games in 2019.

Jones is in a walking boot and did not practice on Wednesday, having seemingly suffered the injury in an incident involving the Green Bay Packers' Preston Smith early on Sunday.

He finished the 31-13 defeat, completing 20 of 37 passes for a touchdown and three interceptions.