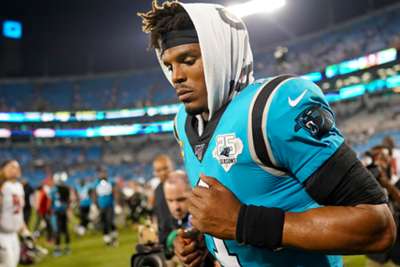 Newton has been on the injured reserve list since November, with a foot injury restricting the former NFL MVP to just two appearances this season.

Now, the 30-year-old will go under the knife in a bid to rectify the issue.

"I know he will have a procedure sometime next week," Fewell told reporters on Wednesday. "That's as far as I can go with it.

"I have no further information than he's having a procedure," Fewell added.

“The NFL is about opportunity. You don’t want to get the opportunity this way, but I am granted that opportunity and I’ve got to make the most of that while I have this chance.” https://t.co/yCtfUm1mVK

Rivera was relieved of his duties after nearly nine seasons at the helm following a run of just one win in six games that dropped the Panthers to 5-7.

"I thought it just came very natural the things that I saw that we needed to work on, and I spoke about those things not only to the players, but the coaches."

"The NFL is about opportunity," he continued. "You don't want to get the opportunity this way, but I am granted that opportunity and I've got to make the most of that while I have this chance."

The Panthers will play the Atlanta Falcons on Sunday, looking to snap a four-game losing streak.