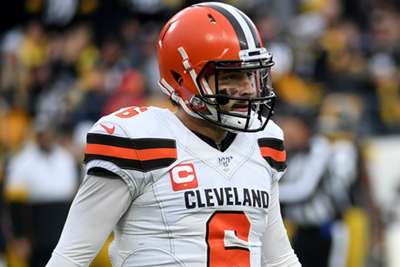 Mayfield suffered a contusion to his throwing hand in last week's 20-13 NFL loss to the Pittsburgh Steelers.

The number one pick in the 2018 Draft, Mayfield has not thrown a pass since the Browns dropped to 5-7 for the season in Pittsburgh.

But Mayfield – who plans to practice on Thursday ahead of Sunday's clash with the Bengals – told reporters: "Mama didn't raise a wuss."

Mayfield added: "If we communicate on the right depths and where we need to be, then I shouldn't have a problem.

"It's all about timing and knowing that we've built chemistry and I need to put the ball where we talk about it and they need to have their depth and be there on time."

Mayfield suffered the injury prior to half-time against the Steelers after his throwing hand collided with the facemask of Pittsburgh's Bud Dupree.

The second-year QB, however, managed to finish the game, having exited the field for tests.

"I'd say if Bud Dupree was there just a millisecond earlier it could've been pretty bad," he said. "But pretty fortunate."