Veasy grateful for Kaepernick workout after getting Redskins chance 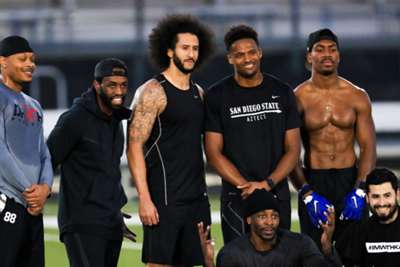 Jordan Veasy has credited Colin Kaepernick for helping him to get his latest NFL chance with the Washington Redskins.

Washington signed Veasy to their practice squad on Wednesday after he was released by the Buffalo Bills – the fourth team with whom the wide receiver had failed to nail down a spot since he went undrafted in 2018.

In between leaving Buffalo and getting the call from the Redskins, Veasy took part in Kaepernick's much discussed workout in Georgia last month.

The former San Francisco 49ers quarterback gave a demonstration that his skills are in fine order despite being without a team since the 2016 season, during which he polarised opinion by kneeling for the United States national anthem in protest against perceived racial injustice and police brutality.

Veasy was on hand to receive a deep ball down the left sideline that went viral on social media and, while Kaepernick remains unattached, the 24-year-old believes the upturn in his own prospects is not unrelated.

"It helped. That's one of the reasons I wanted to be a part of [the workout]," he told the Washington Post.

"Just being a part of the history of it, and I knew it was going to help me.”

Veasy said the experience of operating in tandem with Kaepernick's still "live arm" was "surreal", having been keeping himself in shape in his home city of Gadsden, Alabama.

"I was going to be in Gadsden running routes anyway," he added. "Might as well run 'em in front of some scouts."