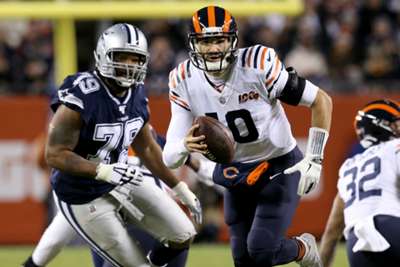 Mitchell Trubisky led the way as the Chicago Bears boosted their NFL playoff hopes with a 31-24 victory over the Dallas Cowboys.

Trubisky – who finished 23 of 31 for 244 yards – threw three TD passes, while he also rushed for one against the slumping Cowboys in Chicago.

After being held scoreless in the second and third quarters, the Cowboys (6-7) rallied to outscore the Bears 17-7 in the final period.

.@MTrubisky10 is doing it all!

However, the Bears held on to see off the Cowboys at Soldier Field and heap further pressure on under-fire head coach Jason Garrett following a third straight loss.

The Cowboys struck first on the road – running back Ezekiel Elliott rushing for a two-yard touchdown with six minutes remaining in the opening quarter for a 7-0 lead.

That was as good as it got for the Cowboys, with the Bears taking control courtesy of Trubisky's arm.

Trubisky connected with Allen Robinson on a five-yard touchdown pass to level the game at 7-7, after the Bears QB had highlighted the drive by throwing a 30-yard pass to JP Holtz.

The Bears settled for a 36-yard field goal, which Eddy Pineiro converted, before they moved 17-7 ahead thanks to Trubisky's pass to Robinson with 10 seconds remaining in the half.

That lead stretched out to 24-7 in the third quarter when a 14-yard touchdown pass from Trubisky found Anthony Miller, though Elliott's two-yard TD run reduced the deficit with 15 minutes remaining.

But Trubisky dashed the Cowboys' hopes after he ran for a 23-yard TD of his own to give the Bears a 31-14 advantage, with Dak Prescott's touchdown pass to Amari Cooper not enough for Dallas.

.@Dak lofts it perfectly to @AmariCooper9 for the score!#DallasCowboys cut the lead to 10.

Cowboys quarterback Prescott was 27 of 49 for 334 yards and a touchdown.