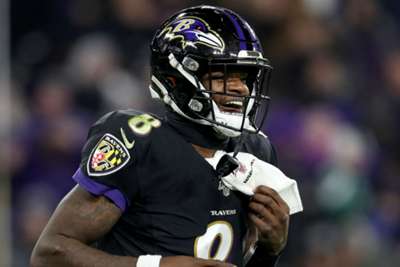 The Baltimore Ravens quarterback and MVP frontrunner surpassed Vick's mark for rushing yards by a quarterback in his team's routine 42-21 victory over the New York Jets on Thursday.

Vick racked up 1,039 yards for the Atlanta Falcons in 2006, but Jackson went beyond that tally with eight minutes and 36 seconds left in the first quarter at M&T Bank Stadium.

Jackson had 86 yards on the ground, taking him to 1,103 for the year. He also threw for 212 yards and five touchdowns as the Ravens clinched the AFC North title.

"It's pretty cool,"Jackson said of breaking Vick's record. "My favorite player growing up. It's amazing, and I'm going to cherish that forever and just got to keep it going.

"Records are made to be broken, like he said. I heard him say that, and it's an honour for me to do it."

Me vs Lamar, 40 Yard Dash on natural grass but he has to wear rollerblades. Who’s buying the PPV?

Responding to Jackson's achievement, New England Patriots quarterback Tom Brady wrote on Twitter: "Me vs Lamar, 40 Yard Dash on natural grass but he has to wear rollerblades. Who's buying the PPV?"

"He's probably going to win that race," Jackson said of Brady's proposal. "Rollerblades on grass? Oh man. I'm going to see what I can do. Tom still got a little bit in him. I've seen him."

Ravens coach John Harbaugh placed the emphasis not on Jackson's record, but on the Ravens' larger goal of winning a third Super Bowl title.

"It's something that I'm sure Lamar will look back on some day fondly," said Harbaugh. "But right now, he has other things to think about." 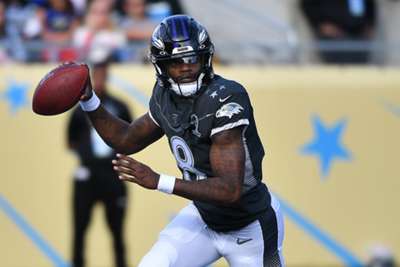