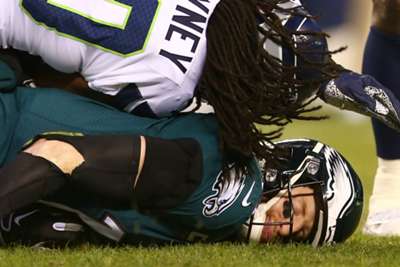 Philadelphia Eagles quarterback Carson Wentz will miss the remainder of the NFC wild-card clash against the Seattle Seahawks with a head injury.

Wentz, 27, left the field and was questionable to return after taking a blow to the back of his helmet from Seahawks defensive end Jadeveon Clowney in the first quarter of Sunday's NFL playoff game.

Veteran back-up Josh McCown replaced Wentz under center before the latter was officially ruled out by the Eagles after half-time in Philadelphia.

Wentz sat out Philadelphia's playoff run in 2017, his second season in the league, after tearing his anterior cruciate ligament (ACL) during the regular season.

Injury Update: QB Carson Wentz has been downgraded to out.

In his absence, Nick Foles steered the franchise to their first Super Bowl triumph, as they beat the New England Patriots 41-33 in Minnesota.

Prior to the postseason showdown against the Seahawks, Wentz completed 388 passes for 4,039 yards and 27 touchdowns in 16 appearances.