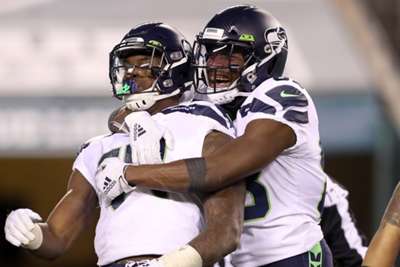 The Seattle Seahawks moved past the injury-hit Philadelphia Eagles courtesy of a 17-9 win in the NFL playoffs on Sunday.

Seattle set up a clash against the Green Bay Packers in the divisional round after proving too good for the Eagles at Lincoln Financial Field.

The Eagles lost quarterback Carson Wentz in the first quarter due to a head injury and never got to their best to trouble the Seahawks in the NFC wild-card showdown.

Seahawks QB Russell Wilson went 18 of 30 for 325 yards and a touchdown, but it was Seattle's defense that dominated.

McCown went 18 of 24 for 174 yards, but Wentz's injury, which came after a blow to the back of his helmet from Jadeveon Clowney, hurt the Eagles' chances.

The Seahawks needed until late in the second quarter to score their first TD as Marshawn Lynch spun over from five yards.

Jake Elliott's three field goals were all the Eagles could manage, with his second bringing them back to a 10-6 deficit in the third quarter.

However, Wilson connected with DK Metcalf with a 53-yard touchdown pass and the Seahawks were untroubled from then.

D.K. Metcalf makes the catch, gets back up and crosses the goal line for the TD! @dkm14 @DangeRussWilson