Pederson: Different game if Wentz didn´t get hurt against Seahawks 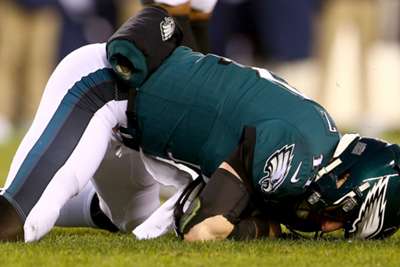 Philadelphia Eagles head coach Doug Pederson believes the NFC wild-card clash with the Seattle Seahawks would have been a different if star quarterback Carson Wentz did not suffer a head injury.

Wentz exited in the first quarter after hurting his head and did not return as the Eagles lost 17-9 to the Seahawks in the NFL playoffs on Sunday.

The Eagles signal caller took a blow to the back of his helmet from Seahawks defensive end Jadeveon Clowney and was replaced by 40-year-old back-up Josh McCown.

McCown – making his postseason debut following 17 seasons in the league – went 18 of 24 for 174 yards as the Eagles failed to reach the divisional round in Philadelphia.

Asked whether the game would have been different if Wentz was healthy, Pederson told reporters: "It's hard to say but I'd say yes if he was healthy. With the game plan we had, I think so. But it's hard to speculate."

The Eagles were hoping Wentz could lead the team deep into the playoffs after the 27-year-old played the entire regular season for the first time since his rookie year.

Wentz had suffered major injuries in 2017 and 2018 as Nick Foles stepped up to guide the Eagles to Super Bowl LII glory – Sunday's playoff appearance his first since being drafted in 2016.

"I feel for him. I feel bad for him," Pederson said of Wentz. "I briefly saw him in the dressing room afterwards.

"I'm disappointed for him. I wanted this for him. A lot of his team-mates did, too. So did the team and organisation. He's been through a lot."

Ertz was rushed to hospital after finding blood in his urine, however, he took to the field two weeks later and was teary-eyed post-game.

"It's been tough. It's been real tough," Ertz told reporters. "It hurts. Been a lot of highs and lows. My faith just kept me through it, kept me grounded. There was a plan for me.

"I just wanted it to be black and white, honestly. I took the emotion out of it. I just prayed that I wanted it to be clear. I didn't want it to be a grey area where it was an emotional decision. When it was unanimous that I was good to play, I knew that there was a plan and a reason, and that's why I was able to go."

"I wanted to play for this city," Ertz added. "I take a lot of pride [in] playing for my team-mates."