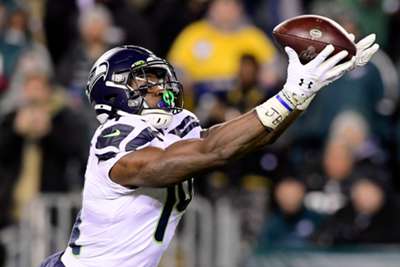 Metcalf had 160 receiving yards on seven receptions and connected with Wilson for the decisive touchdown in a 17-9 wild-card round win.

The 53-yard TD saw Metcalf go to ground in taking the catch before springing up to lunge into the endzone, securing an advantage the Seahawks protected with relative ease.

Quarterback Wilson was particularly effusive in his praise of the "special" 22-year-old, a second-round pick in 2019.

"DK was special tonight, and he's been special all year," Wilson told reporters. "He's one of the best rookies that's come out.

What an outing, @dkm14! pic.twitter.com/YE3Ui3eGsa

"I think the great thing about him, though, is that he's always been professional from day one. Nothing happens by accident.

"[It has been about his] his preparation, how he's prepared week in, week out - even since the offseason - all the extra work, all the early mornings, throwing at 5:20 in the morning in the summer. That's what greatness looks like."

Head coach Carroll added: "I think the night was stolen by DK. He did some stuff that it's hard to imagine anyone else doing."

And NBA great James took to Instagram to add his congratulations, posting on his story: "Congrats young [king]. Too fast, too strong."

The Seahawks move on to play the Green Bay Packers in the divisional round in the NFC.